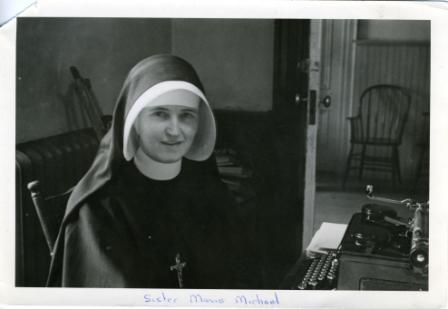 Sister Marie Michael MacKinnon had a long and distinguished career, first at the St.F.X. Extension Department and then at the Coady International Institute. Born in 1905, MacKinnon was a native of the Boisdale (Cape Breton) parish of Father Michael Gillis. As a young teenager she became aware of Gillis’s promotion of rural life and cooperatives and the work of the Scottish Catholic Society of Canada. She attended the Rural Science Training School in Truro and then taught school for three years. In 1927, she entered the novitiate of the Congregation of the Sisters of Saint Martha [CSM] in Antigonish and later received a certificate in institutional administration from Macdonald College in Ste. Anne de Bellevue, Quebec.

The St.F.X. rural conference of 1931 discussed the need for the St.F.X. Extension Department to deal more directly with women’s issues. Thereafter, Extension staff planned for a women’s section, in consultation with the Marthas. In 1933, just as she was finishing a degree at St.F.X., Sister Marie Michael was assigned by her mother superior to the department where she became the new Director of Women and Work Program. Her numerous duties included organizing women’s study clubs and supplying them with information, editing the women’s page in the Extension Bulletin, writing and giving speeches, and assisting with the Extension Department library. 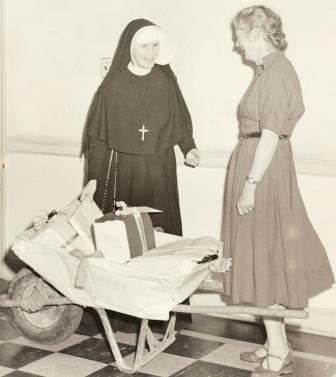 A tall, attractive and gregarious woman who delighted in social interaction, Sister Marie Michael became the unofficial ‘hostess’ for Extension visitors who came in increasing numbers by the late 1930’s. Later on, she exercised that hospitality—a defining characteristic of the Sisters of St. Martha–to make visitors feel welcome and appreciated. For many years, this helped to brighten the visit of hundreds of students at the Coady International Institute.

The women’s study clubs organized and run by Sister Marie Michael focused on domestic topics, such as handicrafts, childcare, sewing, and homemaking, in addition to ‘producer’ topics like poultry raising, bee keeping, butter and milk production, gardening and canning. Although her study groups addressed diverse topics, Sister Marie Michael believed that the women’s groups were not so much about imparting information as they were about exposing women to ideas that would fit them for positions of leadership.

Sister Marie Michael identified a gender bias in both the legal basis of the cooperatives, and in Extension’s funding of the women’s program; she publicly stated as much in 1938. Funding woes and changes in the labour force during wartime led to the discontinuation of her work in the women’s leadership program in 1942. From this point on, she began to spend more time in the Extension library and by 1944 was out of women’s work altogether.

In 1946, she began studies in library science at the Catholic University of America, Washington, then returning in 1947 to work again at the Extension library, a post she held until 1956. That year, she was sent to establish a mission in Boston, Massachusetts, with Sister Irene Doyle and moved into the social work field, receiving a master’s degree in 1959. She returned from Boston in 1960, working briefly at the Extension Department as librarian before settling at the new Coady International Institute library in 1961. The Extension library closed in 1964 and she worked solely at the Coady until 1972 when she went to work at the library and archives of St. Augustine’s Seminary in Ontario. She came back to Antigonish for the final time in 1985 to work in pastoral care at the R.K. MacDonald Nursing Home and retired in 1989 to Bethany, the Marthas’ motherhouse in Antigonish.

Sister Marie Michael MacKinnon died in 1991 after a long life of service to her congregation, St.F.X. University and the larger community of women throughout the diocese and beyond. She was honoured during her lifetime with the 1967 Centennial Medal and a honourary degree from St.F.X. in 1971. In 1974, the library at the Coady was appropriately renamed in her honour.