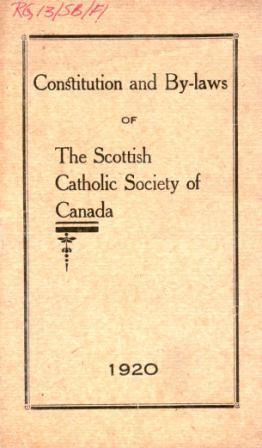 Founded in Iona, Cape Breton in 1919, the Scottish Catholic Society of Canada [SCS] played an important role in the development of the Antigonish Movement. The Society sought to improve the educational, moral and socio-economic circumstances of Catholic Scots in eastern Nova Scotia and Cape Breton. The Society’s slogan “Glòir Dhé agus Math ar Cinnidh” (“For the glory of God and the Good of our people”) reflects its religious orientation and concerns about the well-being of the Scottish Gaels of eastern Nova Scotia and their ability to benefit from economic and social developments without sacrificing their language and culture. The majority of the Society’s members were priests, lawyers, doctors, farmers and merchants.

The Society helped to give birth to the Antigonish Movement in two ways. First, it passed resolutions and pursued policies during the late 1920’s that kept pressure on a St.F X. administration hesitant to take concrete steps towards extension work. The Society in some ways was a mirror, reflecting back to St.F.X. and the Church a vision of what might be achieved. Many of the key players in the Scottish Catholic Society, such as Father Michael Gillis, Father John R. MacDonald and Rev. Dr. Moses Coady, were employed by or closely connected with St.F.X.

Second, the Society was an incubator of sorts for the Antigonish Movement. It was a high profile association where clerical and lay leaders met to discuss and plan various options and techniques for rural improvement. Before the founding of the Extension Department, the Society, along with the Rural and Educational conferences, were fora for ideas and future leaders who would be key players in the Antigonish Movement.

There was a strong geographical correlation between the Scottish Catholic Society and the pioneer fieldwork of the Extension Department. The Antigonish Movement staff would rely heavily on networks within the Roman Catholic Church to initiate work in communities. Many of the priests who belonged to the SCS were already holding meetings and were motivated to help the Extension Department. It is no wonder that 17 of the 21 SCS chapter sites in eastern Nova Scotia and Cape Breton later organized extension study clubs.