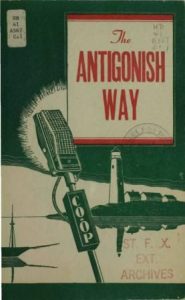 Attempting to define something like the Antigonish Movement is challenging. First, the Movement incorporates several elements or traditions — Christian ethics, the social gospel, scientism, and democratic action or co-operative theory – and so it may mean different things to different people depending on their interests. Second, what exactly is a ‘movement’? Does the term apply to what happened in Antigonish? To answer the first question, any definition of the Antigonish Movement should include the concepts of adult education and cooperation. Adult education was learning brought directly to the workplaces and homes of the people. This teaching method, organized by intensive fieldwork, became a technique for mobilizing adults for continuous study, by means of small and serious social action study groups. The end result was the generation of new economic cooperation for the common good. Yes Christian faith played a part and democratic ideals were central, but the Movement can be understood most simply and accurately as an attempt to improve people’s economic status via cooperation in a secular, non-partisan, ecumenical arena. Can what ensued in Antigonish in the 1930’s and 1940’s be thought of as a ‘movement’? Yes. The St.F.X. Extension Department organized and led a series of actions intended to produce a particular end, namely a self-sustaining cooperative system in eastern Nova Scotia rooted in the community and supported by a citizenry enlightened by adult education. At the same time, many outsiders came to see and study the activities of the Extension Department. They reported on and spread the ideas and techniques to the wider world and in doing so helped propel the work of the Extension Department from a local, particularistic movement into a generalized form sought by various groups seeking to promote a broad goal – improved socio-economic conditions and justice for the masses anywhere in the world. The Coady International Institute, founded at St.F.X. University in 1959, was the main vehicle for spreading the movement at the international level.

The Antigonish Movement arose out of a search for solutions to chronic socio-economic problems that plagued the Maritime Provinces from the late 1880’s onwards. Regional out-migration continued unabated for decades into the 1920’s as young people left farms in favour of industrial jobs in local centers or elsewhere in North America. On the coasts, a small number of fish merchants and companies kept fishermen and their families in semi-feudal bondage. After World War I, labour strife frequently ripped apart industrial communities as workers and militant unions battled corporations that were intent on extracting profits from their undercapitalized and inefficient mines and mills. One technique was to squeeze workers’ wages and burden them with debt. The response of Maritime governments to this economic decline was ineffective. Externally, out-migration reduced the region’s power and influence in federal politics. The Maritime Rights Movement of the 1920’s, an attempt to obtain redress of Maritime grievances against ‘injurious’ federal policies, failed. Internally, Maritime government’s laissez-faire policies supported business interests who were themselves disunited but also hostile toward any attempts to help the struggling workers. By 1910, many contemporary observers, noting that a malaise and pessimism had come to characterize the regional psyche, began to point to education as the key for positive change. With few exceptions, the public school system was parochial and inadequate; in many rural places, it was downright abysmal. In a province where the bulk of the population was still rural, 90 percent of Nova Scotia students never reached high school. Schools were poorly built and supplied; teachers were chronically underpaid and often poorly trained. The small elite of university students sought liberal arts professions and careers that often took them to distant towns and cities. There was little access to practical vocational training. In short, the education of the masses was deficient while elite education yielded little, if any, trickle down benefits for common working people.

A ‘homegrown’ response to the socio-economic problems of the time arose out of a unique confluence of elements existing in Cape Breton and eastern Nova Scotia. First, demographically, Irish Catholic and Scottish Catholic farming families predominated in many areas. The Scots were a racial and cultural group characterized by close and extended family relations, subsistence farming, and shared cultural traditions rooted in the Catholic faith, the Gaelic language and traditional Celtic folkways. The Diocese of Antigonish, covering all of Cape Breton Island and the eastern mainland counties of Antigonish, Pictou and Guysborough, was serviced by priests who were predominantly native sons. Many were increasingly worried and vocal about the deteriorating state of their parishes. They witnessed firsthand the empty farmsteads, the grinding poverty, and the general decay of rural life. These priests were usually respected community leaders. Many were educated in Quebec or Rome, and some had knowledge of adult education and the cooperative techniques being used in Europe and the United States. Parishioners deferred to their ecclesiastical authority and respected their status as the best and brightest of their ‘nation’. That certain members of this group chose to articulate forcefully and skillfully both a critique of Church inaction and a way forward, was of enormous import to the origins and success of the Antigonish Movement. Another key element leading to the birth of the Antigonish Movement was St. Francis Xavier University [St.F.X]. It was the Catholic institution of higher learning in eastern Nova Scotia and was situated in Antigonish, the seat of the Diocese. St.F.X. was an institutional loci where the Catholic professional elite and hierarchy periodically met. Here, their discussions about the regions’ problems and possible solutions would eventually coalesce into the Antigonish Movement. At St. F. X. diocesan conferences were held between 1918 and 1929 which gave the priest-leaders a forum to share ideas and call for action. As well, it was in the columns of the diocesan-controlled paper, The Casket, where important clerical leaders like Fathers J.J. Tompkins, Moses Coady, John R. MacDonald, and many others, developed original ideas about study clubs, extension work and cooperatives. Finally, it was at St. F. X. where the Bishop, having reached his decision in 1928 to support the creation of an extension department, located the new project. In short, the existence of St. F. X. with its wealth of human resources created a physical and intellectual base from which the Antigonish Movement would spring. The Scottish Catholic Society of Canada, founded in Iona, Cape Breton in 1919, played an important role as well. The society aimed to advance educationally, morally, socially and otherwise, the Catholic Scots in eastern Nova Scotia and Cape Breton. The majority of the Society’s members were priests, lawyers, doctors, farmers and merchants. The society played two roles in the founding of the Antigonish Movement. First, it passed resolutions and pursued policies during the late 1920’s that kept pressure on a St. F. X. administration hesitant to take concrete steps towards extension work. The society was in some ways a mirror, reflecting back to St. F.X. and the Roman Catholic Church a vision of what might be. Many of the key players in the Scottish Catholic Society, such as Fathers Michael Gillis, John R. MacDonald and Moses Coady, were employed or closely connected with St. F. X. Secondly, in its role as a place where Catholic Scots looking for answers could meet, it functioned as an incubator for the Antigonish Movement. After the Extension Department was established, there was a strong geographical correlation between the parishes of those priests involved in the society and the location of the first study clubs.