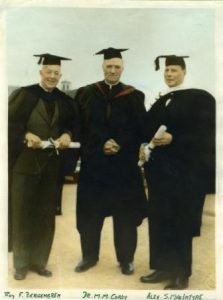 Alex S. MacIntyre was born in Boularderie, Cape Breton and went down into the pit—the coal mines–at the age of 14. From miner he rose to the vice-presidency of a United Mine Workers of America local. During the turbulent days of the 1925 miners’ strike in the Cape Breton coalfields, top union officials were arrested and imprisoned. As a result MacIntyre was blacklisted. Unemployed, he was obliged to move his family onto a farm to survive; subsequently he suffered a long period of ill-health.

He was socially-minded and sensitive to injustice from boyhood, and thus was initially attracted to communism during the coalfield’s dark decade of the 1920s. However, in the early 1930s he was drawn to more moderate reform principles when he plunged into the study club program of the Extension Department of St. Francis Xavier University. MacIntyre used his passionate, blunt style to good effect at a diocesan conference called by Bishop James Morrison to discuss Extension’s possible foray into the coal-mining communities of Cape Breton. For two hours, he detailed the plight of the miners and his own personal struggles to remain committed to both unionism and his Roman Catholic faith.  Believing that he could influence the miners and ultimately help to suppress the rise of communism in the region, he was hired in 1932 as Extension’s first fieldworker and was sent to start the new Glace Bay operation. He worked closely for many years with another Extension fieldworker in Glace Bay, Ida Delaney.

MacIntyre was a strong supporter of the credit unions. He was the president of the first credit union in Nova Scotia at Reserve Mines, and subsequently became the founding president of the Nova Scotia Credit Union League. In 1944, he was named managing director of the Cooperative Union of Nova Scotia. In 1949, he was loaned to the Newfoundland government to assist in the organization of its new Department of Cooperatives. Earlier, he had helped with the organization of the Extension Department of the University of British Columbia. MacIntyre received a honourary Master of Arts degree from St.F.X. in 1949.

Following his return from Newfoundland, MacIntyre resumed his work with the St.F.X. Extension Department which now had an office at Xavier Junior College in Sydney. He died in 1952.