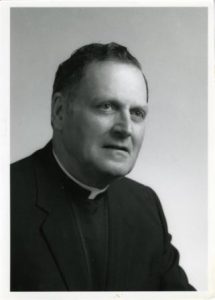 Sydney native Reverend George Topshee was an outstanding Xaverian, pastor, social reformer, Extension worker, and director of both the St.F.X. Extension Department and the Coady International Institute. He studied theology at St. Augustine’s Seminary, Toronto, and was ordained to the priesthood in 1943 at St. Michael’s Cathedral, Toronto.

As an undergraduate at St.F.X., George Topshee won distinction as a versatile athlete and admiration from his professors and fellow students. He was awarded the prestigious Larkin Trophy in 1939. His concern for people and their condition, evident early in his priestly career, gained him the affection of those he served. From 1943 to 1951 he was assistant in the parishes of Pictou, St. Andrews, and at Sacred Heart Church in Sydney. He was then appointed pastor of Thorburn for ten months and later director of the Sydney St.F.X. Extension office in September 1952. He held this position for seventeen years while at the same time acted as pastor of Immaculate Heart of Mary Parish, Mira Road.

He brought natural talents and understanding to the task. As well, he “had been there” and knew the problems of the laborer and wage earner from first-hand experience. For three years (1933-1936), before entering university, he worked at the Sydney Steel Plant. In 1969, he was named Director of the St.F.X. Extension Department, succeeding the Rt. Rev. Joseph N. MacNeil upon his appointment as bishop of Saint John, NB. Four years later, in 1973, the directorship of the Coady International Institute was added to his responsibilities. He held this position until 1979. He resigned the position of Director of Extension in March 1982 due to health reasons.

In light of the reduced importance of traditional industries such as coal mining and fishing in the 1970s, Topshee believed that the St.F.X. Extension Department should shift its programming to new areas, such as low-cost housing and labour force education and retraining. Thus, he vigorously promoted co-operative housing and labor education, and was instrumental in bringing the bilingual quarterly Atlantic Regional Labor Education Center (ARLEC) to St.F.X. The Topshee Memorial Conference that convened biannually for a number of years at St.F.X. to discuss subjects relating to social reform was named in his honour.