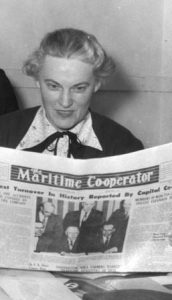 Ellen Arsenault was born in Traveler’s Rest, near Summerside, Prince Edward Island in 1908. She was educated at Miscouche Convent School, and Prince of Wales College, Charlottetown, PE. For five years she taught school on the Island and then received a business secretary diploma and worked as a legal secretary and at the Provincial Bank there. She was a young widow with children when Dr. Moses Coady, first director of the St. F.X. Extension Department, asked her to move to Antigonish to join the staff of the St. F.X. Extension Department. She acted as his personal secretary for many years. Upon Dr. Coady’s death in 1959 she became secretary to the first director of The Coady International Institute, Msgr. Francis J. Smyth, and also acted as admissions secretary there as well.

In 1974 she represented the Coady at an ACOSCA African Coop Savings and Credit Association conference held in Zambia, Africa. She retired from St. F.X. in September 1977. As one of the executors and curators of Dr. Coady’s papers she worked closely with many academics and scholars researching the history of the St. F.X. Extension Department and the Antigonish Movement. She was actively involved in St. Ninian’s Cathedral Parish as a lector, member of the choir, Catholic Womens’ League and St. Vincent de Paul Society. She died September 27, 2005 in the Port Hawkesbury Nursing Home. Funeral services were held from St. Ninian’s Cathedral, Antigonish, NS, with burial in the parish cemetery.