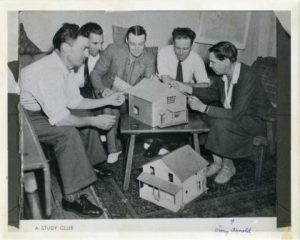 Mary Arnold led a fascinating life: she was by turns an upstate New York farmer, western Indian agent and successful New York City housing co-operator. In 1937, she traveled from New York City to attend the Rural and Industrial Conference at St.F.X. where she met Dr. Moses Coady and Father Jimmy Tompkins and became interested in the Antigonish Movement.

Through her discussions with “Father Jimmy,” she became aware of the need for housing in his parish of Reserve Mines, Cape Breton, and, ready for a new adventure, Arnold brought her housing expertise to help.

Arnold possessed considerable talents in architectural design, planning, management, and community organizing. She embraced the miners of Reserve Mines–not always a passive constituency–and was instrumental in getting provincial cooperative housing legislation passed in Nova Scotia. She also organized the housing co-op, planned the development, and managed its details and money. By the spring of 1939, Reserve Mines residents had erected ten houses and the “Tompkinsville” project, as it was called, was considered a great success. It served as a template for similar housing co-ops in Nova Scotia.

Always a restless spirit, Arnold left Cape Breton in 1940, thereafter working in Newfoundland, Maine, Arizona, Pennsylvania and Latin America. She continued to write co-operative pamphlets, study guides and two books based on her Nova Scotian experience, including The Story of Tompkinsville. Mary Arnold brought new links and resources to the Antigonish Movement and continued to do so after she left, primarily through her correspondence with her life-long friend Dr. Moses Coady and her publications. Perhaps more importantly, her unique life story, which blended obvious competency and grass roots experience with an unwavering commitment to personal choice and belief, served as an example of the different possibilities for women at a time when little room existed for non-conformity.