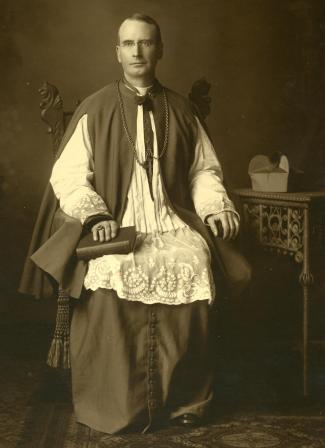 A native of Prince Edward Island, James Morrison was born into a community that was proud of its rural, Catholic traditions. Educated in local schools and at St. Dunstan’s University, Charlottetown, Morrison entered the seminary at the Urban College in Rome and was ordained in 1889. Over the next twenty-three years, he had several clerical and administrative appointments on Prince Edward Island before succeeding the late Bishop John Cameron as Bishop of the Diocese of Antigonish in 1912. Due to failing health Rev. John R. MacDonald was appointed his co-adjutor in 1945. Morrison remained in office, however, until his death in 1950.

Morrison represented the last generation of remote, powerful and austere 19th century-style Catholic bishops whose power went largely unchallenged. During his career, the Roman Catholic Church witnessed enormous social change and economic unrest in the west while trying to maintain its traditional hold on the laity. When he arrived in Antigonish, the Diocese was undergoing profound dislocations brought about by North American industrialization and rural out-migration. Many observers felt these forces threatened to undermine the very foundations of the Church in the area. Morrison was prudent, cautious and pragmatic, sometimes to a fault, but he was also willing to step aside and allow those best suited to face the issues a chance to do so.

Although often remembered negatively for his 1922 ‘banishment’ of Father J.J. Tompkins from St.F.X. University to Canso during the university federation controversy, he also played an instrumental and positive role. While his cautious prudence and canny, autocratic demeanor often frustrated his subordinates, he was no reactionary and accepted his responsibility to support efforts to improve the lives of Catholics and non-Catholics alike. He allowed his clerics to discuss and act for socio-economic change, supported organizations such as the Scottish Catholic Society of Canada, made room for debate in the diocesan newspaper The Casket, and, in the end, assented to the creation of the Extension Department at St.F.X. As Bishop of the Diocese and Chancellor of the university, he supported Extension work throughout his long career.