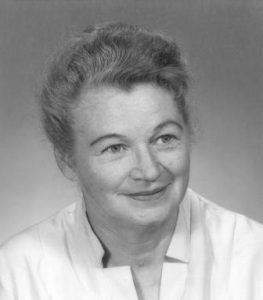 In 1931, a young Kay Thompson received an urgent request from Dr. Coady to leave her job in New York City and return to Nova Scotia to assist him and A.B. MacDonald as they organized the new St.F.X. Extension Department. The recent graduate of Mount Saint Bernard College, Antigonish, and the Nova Scotia Teachers College, Truro, was a dedicated social reformer, proficient journalist and skilful organizer. She was an excellent choice as Coady’s general assistant. Besides acting as secretary and trip organizer for the dynamic director, she supplied the growing number of study clubs in eastern Nova Scotia with study material, much of which she wrote or adapted.

Following her marriage to Levis Desjardins in 1942, she was labour editor of The Maritime Co-operator until 1947 when she succeeded George Boyle as managing editor of that newspaper. She also wrote the popular pamphlet Maritime Techniques in Consumer Cooperation. For twenty-three years, she produced the bi-weekly The Maritime Co-operator, until retiring in 1970 for health reasons.

A tireless advocate for human rights, her efforts were recognized when she received two honorary doctoral degrees (from St.F.X. in 1953 and St. Dunstan’s University in 1968) and various national and international awards for journalistic excellence. In 1988, the Atlantic Co-operative Council named her Outstanding Co-operator.

Coady correctly concluded that hiring Desjardins was the “smartest move I ever made.” Not only did Kay Thompson bring writing talent to Extension, her mediation skills also helped two strong-willed personalities–Coady and MacDonald–resolve differences and work collaboratively. This talented writer, lecturer and editor, together with several other women, provided the organizational and literary skills that helped to propel the Antigonish Movement to success.