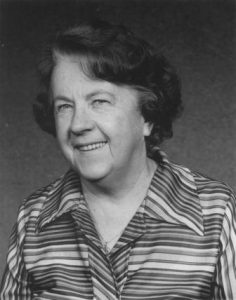 Zita Cameron was born in Melrose, NB. She received a Bachelor of Arts degree (1934) and a Master of Arts degree (1937) from St. Francis Xavier University, Antigonish, NS. She taught school in Egerton, Pictou County, NS from 1934-1936. From 1937-1946 she acted as assistant to Dr. Moses Coady, first director of the St. F.X. Extension Department. From 1970-1977 she was editor of The Atlantic Co-operator and from 1970 until her death she was an editorial writer for The Antigonish Casket. She was also a freelance writer and had her work published in Columbia,America, The Commonweal, The Family Herald and smaller journals.

Among the awards she received were from the Canadian Women’s Press Club (1957) first place column CWP, second place column (1959) from the Co-operative Editorial Association, annual awards for editorial columns from the Co-op National News Service (N.Y.) for editing the best co-op publication (1976), from the Atlantic Co-op Union (1989), and for Distinguished Co-operator. St. F.X. awarded her an honorary doctorate of laws in 1978, in recognition of the 25th anniversary of the St. F.X. Extension Department. She was a member of the Order of St. Augustine, the Canadian Women’s Press Club, and the Co-operative Editorial Association (now Co-op Communicators). She died June 30, 1999 in Antigonish, NS and was buried from St. Ninian’s Cathedral, Antigonish, NS.