Lifelong Learning and the Fight for Social Justice

South African born Coady graduate, Sadi Motsuenyane, has more than 50 years of community development experience. Retired from the Government of South Africa as the former Chief Director of Sustainable Livelihoods with the Department of Social Development, Sadi’s community work has spanned from the historical South African apartheid system, entrenched in racial segregation, to South Africa’s current democratic model installed in 1994. Despite the advancements made through South Africa’s Truth and Reconciliation Commission (TRC), she says there is still much work to do to create Nelson Mandela’s dream of a “rainbow nation”.

“The way our settlements were during the apartheid, they’re still the same now,” Sadi says.

“You cannot change things that are structural overnight. There are still high levels of unemployment, high levels of poverty, and the inequality gap is growing. Social justice is still an issue.”

A graduate of StFX’s Coady International Institute, Sadi has been tireless in her fight toward social justice, and in implementing the asset-based approaches that she developed at Coady.

“We are changing the mindsets of people from seeing themselves as passive beneficiaries of development to becoming active participants. Now they see themselves as assets.”

As a retiree, a mother, and a proud grandmother, Sadi emphasizes this journey of learning and sharing is not only lifelong, but a purpose to be fulfilled.

“I will only retire on my day of death…as long as I am still breathing there is no way that I can retire – the assignment is just too big.”

There are benefits to embarking on this journey later in life too.

Not only does retirement offer new freedoms, but she is also changing the face of retirement and inspiring leaders of the future.

“There are people who do not see life after retirement. Everybody says now, ‘I am not afraid of retirement’. My grandchildren say, ‘Granny, you challenge us. If you can do it at your age, why can’t we do it?’”

Reflecting on her relationship with Coady – first as a student, then as a member of its advisory board, and now as its seventh Coady Chair in Social Justice Sadi says, “The work of Coady is highly regarded in South Africa.” 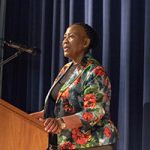 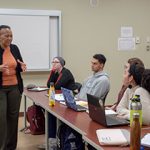 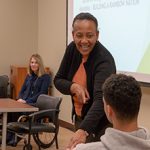