Going the Distance is a national project that addresses under-representation of Indigenous people in the labour force specifically in the tourism and hospitality industry. The goal is to develop solutions to workplace literacy and essential skills (LES) needs and challenges. LES has been at the core of FESA’s work in Alberta and across Canada since its inception in 1996.

“Our primary focus is on adult foundational learners who have given up on learning and looking at ways to get them back into learning,” Elaine, a FESA co-founder, says.

FESA’s programs are for learners who face poverty, abuse, low-literacy, single-parenting, recent immigration, lack of support systems, unemployment, learning disabilities, addictions, and unfamiliarity with community resources and/or formalized systems. Today, between 30 to 50 per cent of FESA’s work is in Indigenous communities at a grassroots level.

Karri-Lynn is a board member for the Going the Distance National Advisory Circle. Through that relationship, Elaine became familiar with Coady’s Indigenous Women in Community Leadership (IWCL) program.

“Karri-Lynn talked about the various regions we were working in where there were Coady graduates,” Elaine says. “Her idea was to make those connections with Coady graduates and see if they were interested.”

FESA has the materials and training already developed but needs more trainers and facilitators to keep up with demand for Going the Distance. As FESA begins work in more communities, IWCL graduates are going to be co-facilitating. Two graduates, Wyanne Smallboy-Wesley and Kirsten Rider, are already engaged on the project.

“I think there are plenty of leadership opportunities to engage our IWCL graduates as facilitators and trainers in the kind of grassroots literacy and parenting workshops FESA offers such as Indigenous Parenting after Violence, Indigenous Foundational Learning, Indigenous Literacy and Parenting Skills, and Indigenous Workplace Circles,” Karri-Lynn says.

She believes the content is both relevant and needed in Indigenous communities while the work is also flexible and applicable in any province across Canada.

“It’s also essential that we have Indigenous peoples, especially women, as leading/facilitating this work,” Karri-Lynn says.

Elaine agrees community involvement is important and believes Coady’s ABCD training will play an important role in the long-term success of the project.

“The idea is that after we are gone, they will be equipped to deliver any of the programs or the trainings we have developed so the work will continue on,” Elaine says. “It is perfect for us because they have had all that training in leadership that Coady has given them.”

The workshop on ABCD principle emphasizes this point.

“Would this training be something that we could use with them to help them analyze what their assets are, how to use the leaky-bucket, and all that we learned. Would it be transferable? I think it should be.”

It is why Teal and Elaine traveled to Antigonish to get a look and better feel of what Coady has to offer.

They also wanted to meet with Eileen and Coady Executive Director Gord Cunningham.

“Coady has some areas of expertise that are needed, so we are looking at ways that we can work together so we can take things to a higher level in terms of doing this work,” Eileen says.

“I think we have shared philosophies and approaches to building community capacity,” Elaine says. “We both want to build community leaders to move everything forward in the communities they live in.” 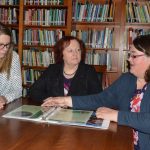