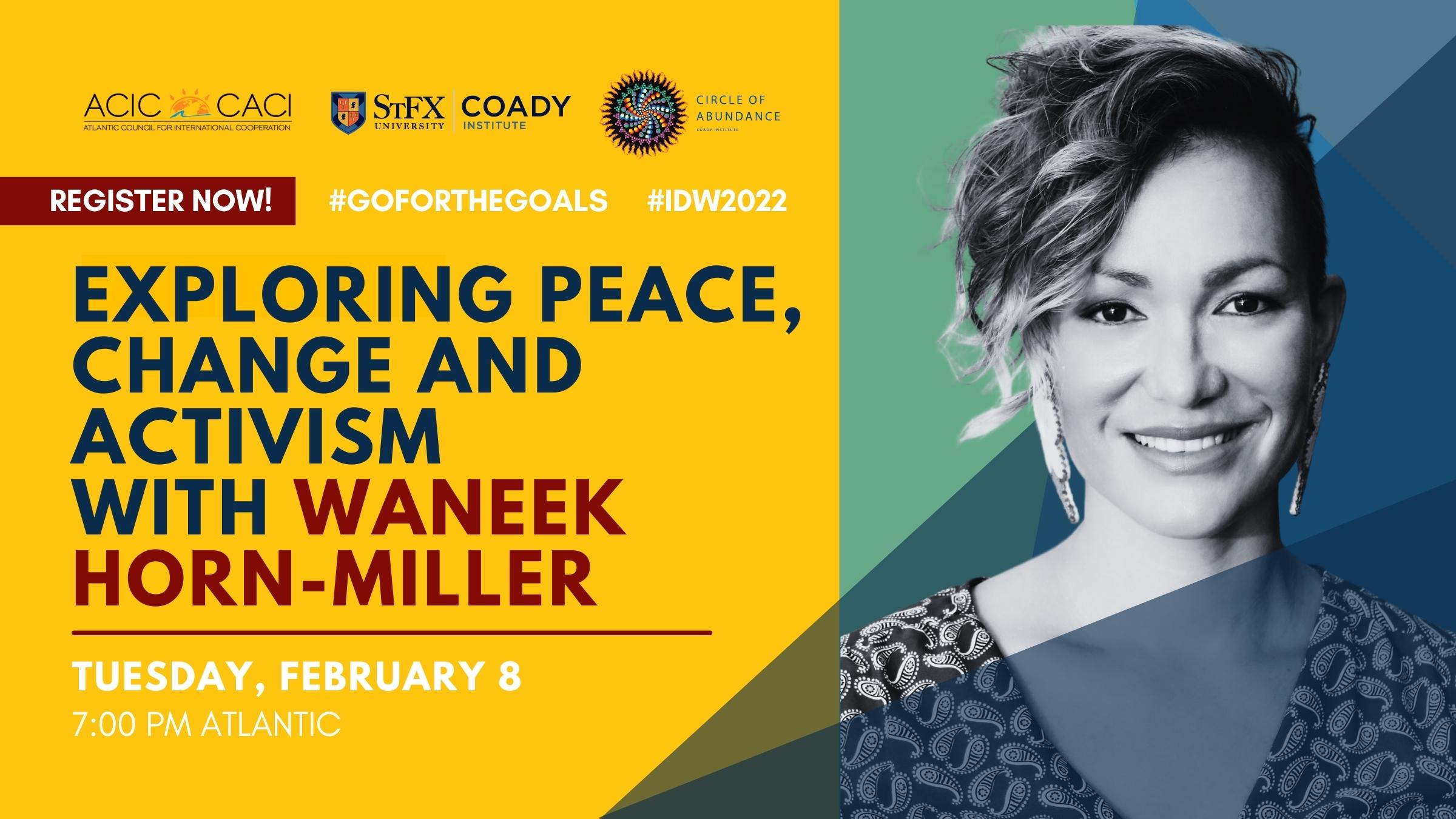 “Being a Mohawk woman on a team that was half English, half French, it was like being in a little part of Canada and reconciling the different ways of knowing to be the strongest we can be. I knew we had this common goal of becoming Olympians… when we kept our eye on the prize, we could figure out our way through these things… What are we trying to create in this country? What are we trying to do as human beings, regardless if you are Mohawk or non-native, what are we trying to do for our children and grandchildren?” – Waneek Horn-Miller

This International Development Week, as we learn more about our actions and efforts in building just, equitable and sustainable communities locally and globally, we invite you for an evening of learning and introspection on the role our stories play in changemaking. Join us for an evening with Waneek Horn-Miller as we explore the concepts of peace and balance, and their role in communities, change-making, and reconciliation. In this moderated conversation, Waneek will discuss the evolution of her activism from “being raised at the knees of one of the first Native activists,” to her involvement in the Oka crisis, to her role as the Director of Community Engagement for the National Inquiry into Missing and Murdered Indigenous Women and Girls.

Waneek, through her personal story of becoming an Olympian, will shed light on the role sports played in her life, the importance of building internal peace that then touches all our communities, and the importance of working towards incremental change that brings lasting, global impact.

Join us for an evening to think more about the role we play as ancestors to future generations, to identify the assets we have in ourselves and our communities, and to harness them effectively for healing and change in Canada and around the world.

Throughout her life, Waneek Horn-Miller has always stood up for what was right—as a mother, an activist, an athlete, and an entrepreneur. This has entailed hard choices, pain, and sacrifice. But this commitment has also made her one of Canada’s most inspiring figures. Previously, she assumed the role of Director of Community Engagement for the National Inquiry into Missing and Murdered Indigenous Women and Girls. By connecting the commission to victims’ families, as well as the public, she provided a recognizable and trusted face to an incredibly important initiative: one that seeks justice, raises awareness of violence against Indigenous women, and furthers the dual tasks of healing and reconciliation.

Horn-Miller’s public life began in 1990 at the age of 14. During the Oka Crisis, she protested the planned development of condos and a golf course on traditional Kanien’kehá:ka (Mohawk) lands and burial grounds near Montreal. After nearly 80 days of stand-off with the RCMP and armed forces, she was stabbed in the chest by a Canadian soldier wielding a bayonet. The image of her wounded, holding her young sister, was shared across national media—and further galvanized Canadians to better understand, and care about, Indigenous issues. This near-death experience marked a turning point in her life. Instead of succumbing to very real traumas, including PTSD, she found the strength to pursue, and achieve, incredible things. “I come from people who have gone through horrific things in history,” she says. “War, death, famine, genocide. How many times did my ancestors want to give up, lay down, and die? But they didn’t. They fought to continue. You have to keep going forward.”

One of Horn-Miller’s greatest achievements has been in athletics. She was the first woman to be named Carleton University’s Athlete of the Year, which she won four years in a row. After winning gold with her water polo team at the Pan Am Games in 1999, and after winning MVP of the Canadian Senior Women’s Water Polo National Championships, she became the first Mohawk woman from this country to ever compete in the Olympic games, co-captaining Team Canada in Sydney in 2000. That same year, she appeared on the cover of TIME magazine. This became another iconic image—one of dignity, poise, and power, as opposed to pain and fear—as well as a milestone for Indigenous athletes. She went on to win bronze at the 2001 FINA World Championships and became a torchbearer for the Winter Olympics in Turin. She has been named one of Canada’s most influential women in sport by the Canadian Association for the Advancement of Women and Sport and Physical Activity. In October 2019, she was inducted into Canada’s Sports Hall of Fame, making her the first water polo player ever to be honored.

After her retirement as an athlete, she has gone on to help others achieve in sports and lead healthy, balanced lifestyles. She was Assistant Chef de Mission for Team Canada at the 2015 Pan Am Games. She is also the host of Working It Out Together—a 13-part documentary and healthy-eating initiative with the Aboriginal Peoples’ Television Network, which aims to build “an Indigenous movement of positive change” and “features dynamic leaders in health advocacy and courageous men and women who are figuring out what it takes to be well and to thrive.” Her work here was recognized with a 2015 DAREarts Cultural Award.