The initiative aims to build on the Institute’s 60-year history of accompanying social change leaders, and ten years of hosting the Institute’s award-winning Indigenous Women in Community Leadership program for self-identified First Nation, Métis, and Inuit women in Canada. 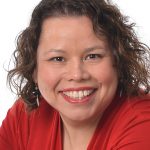 “These funds are significant to the work we plan to do in the next few years,” Paul says.

The first step is to develop, design, and deliver an online leadership course for Indigenous women in the coming spring, Paul explains. Then, to expand the Indigenous Asset-Based Community Development workshops that launched in September with support from the initiative.

“Longer-term, we want to revitalize and further decolonize the Indigenous Women in Community Leadership flagship program and partner with graduates to offer regional programs.” 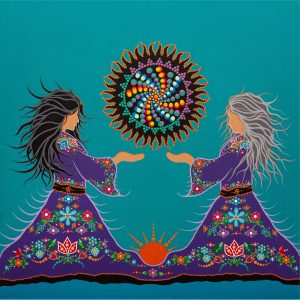 “Keepers” by Mi’gmaq artist Tracey Metallic was unveiled as the visual theme for the Circle of Abundance initiative during the November 19 virtual announcement.

In addition to a $200,000 gift from Reynolds and Lively, the initiative received a significant boost from the Jeannine Deveau Education Equity Endowment Fund who matched the duo’s gift plus another $300,000 in raised funds. The initiative received support from the Donner Canadian Foundation, Edwards Family Foundation, StFX Chancellor John Peacock and wife Adrienne, and many individual supporters.

“The Circle of Abundance is something I support because I believe that there’s no stronger advocate for a community than those living within that community,” Reynolds says.

Eileen Alma, Director of the Institute’s International Centre for Women’s Leadership, says that partnership with Coady graduates and advisors is key to the initiative’s success.

“We’re so appreciative of the level of support and encouragement we’ve received from so many individuals and organizations. We’re especially thankful for the amazing relationships we have with Indigenous women graduates and advisors who are the backbone of this initiative,” Alma says.

“This is an exciting period for Coady Institute as we further build opportunities for sharing, learning, and co-creation of community initiatives with Indigenous participants across the country and globally.”

Learn More about the Circle of Abundance