The Antigonish Movement’s philosophy and principles were securely tethered to the daily lives – both the struggles and joys – of the people in early 20th-century northeastern Nova Scotia.
“The real world founded the Antigonish Movement.”
The Honourable Allan J. MacEachen, former Deputy Prime Minister of Canada

—
Click here to read about the people of the Antigonish Movement.
—

Faced with the chronic socio-economic hardship of the region, a number of leaders in the Catholic Church began seeking solutions within the non-partisan Social Gospel tradition, Catholic Social Action, and the emancipatory theories of democratic action and cooperation. Bonded through the tightly knit Diocese of Antigonish, these down-to-earth individuals were well positioned to collectively explore paths toward a brighter future with the communities they were committed to improving.

StFX quickly became a place to share ideas and, later, a catalyst for action. It was here that extension work began, eventually leading to the establishment of the Extension Department in 1928 with Dr. Moses Coady appointed as its first director.
The Antigonish Movement was largely inspired by two cousins, Rev. Jimmy Tompkins and Rev. Dr. Moses Coady. Growing up amid the lush agricultural fields of the Margaree Valley on Cape Breton Island, at an early age they witnessed the emigration of young people for opportunities elsewhere. Both educated at StFX and later in Rome for the Roman Catholic priesthood, they resolved to address the pervasive challenges facing their homeland. Complementing their shared resolve, the younger cousin, Moses Coady, also had a deep passion for poetry, which easily translated into eloquence. This gift would enable him to capture the hearts and minds of scores of people in Nova Scotia and beyond with the vision of a more just and equitable world, where they can all enjoy “the full and abundant life.” 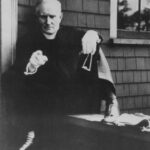 Joining the faculty of StFX, Tompkins and Coady found like-minded people seeking to change the plight of Nova Scotia communities. Priests from across the Diocese bore witness to the rapid decline evident in their parishes, and a handful of scholars were beginning to explore solutions. StFX quickly became a place to share ideas and, later, a catalyst for action. It was here that extension work began, eventually leading to the establishment of the Extension Department in 1928 with Dr. Moses Coady appointed as its first director.

The creation of the Extension Department signaled a real commitment to action. The early work of Extension focused on people whose livelihoods depended on the primary economic activities: fishing, farming, forestry, and mining. Gradually, a critical mass of partners coalesced around the Department, who started spreading the Movement’s philosophy and methods. With the Extension Department serving as the home base – possessed of intellectual capital as well as some financial and material resources – the Movement surged forward in establishing a network of study clubs across the region. This popular education method, taking place in kitchens and community halls, was rooted in the idea that knowledge of the conditions shaping life in Nova Scotia would lead to self-improvement, cooperation, and collective action. Mobilizing through the study groups, communities throughout the region were successful in developing a vibrant network of cooperatives and credit unions, as well as cooperative canneries and warehouses. By the mid-1930s, 940 study clubs had been convened with over 10,000 members and 45 credit unions had been established. The 1990s saw a revitalization of these ideas and efforts when People’s Schools were held in several communities focusing on the economy and health.

As early as the 1930s, the StFX Extension Department became a vital part of local community life, offering leadership courses (precursors of today’s Rural Leadership Development Program), short-term vocational and cultural education programs, technical and folk schools, library and publishing services, lectures, debates, and rural and town improvement competitions. From those early days on, Extension has been committed to fostering local leadership, provoking debate, sharing knowledge, and building a civil society that was independent and resilient. With time, the Department’s work became more wide-ranging, expanding beyond its initial focus on the natural resource sector into new areas such as affordable housing and health, as well as gender and family issues. The widespread demand for the Department’s work eventually led to the opening of field offices in Sydney and Glace Bay, and other places, with numerous fieldworkers engaged throughout northeastern Nova Scotia. In 1972, the Extension Department, in partnership with the Canadian Labour Congress, established the Atlantic Region Labour Education Centre, which offered annual programs on the StFX campus until 1997. Up until 2000, the Department also offered degree and non-degree courses through its Continuing Education Program [Continuing and Distance Education]and training in the field and practice of adult education through its Train the Trainer Program[Diploma in Adult Education].

From the 1940s onward, news of the Antigonish Movement spread far and wide, and people from all over the world flocked to the StFX campus to gain first-hand experience of the Movement’s methods with a view to applying them to their own communities. This demand led to the establishment of the Coady International Institute in 1959 – dedicated to providing leadership education programs for development practitioners from around the world, primarily the Global South.

At home in Nova Scotia, one of the most significant accomplishments of the Extension Department was the founding of the Annual Topshee Memorial Conferences in 1984. Named in honour of Rev. George Topshee who served as Director of both the Extension Department (1969-1982) and the Coady International Institute (1973-1979), these conferences provided a forum in which people from all walks of life could meet to discuss critical social and economic issues affecting life in Atlantic Canada. A total of 18 conferences were held, the last in 2004.

While much has changed in Nova Scotia since the early days of the Antigonish Movement, the Extension Department continues to hold the Movement’s Six Principles and its pillars of adult education and collective action at the heart of its work. In this era of globalization, the Antigonish Movement is as relevant for Nova Scotians today as it was in the 1920s and 1930s.

For additional information, please see The Principles of the Antigonish Movement.